Mr. Darcy is the hit of my pants*

I woke up early this morning to Max crawling ACROSS JOE'S FACE so he could hide his face between our pillows. Normally these kinds of shenanigans would get Max kicked off the bed POST HASTE but it was thunderstorming and he was scared and COME ON, how could I possibly force him off the bed when his sad little scared face was trembling nose-to-nose with mine. Joe and I tried to go back to sleep, but it didn't really work because Joe was pretty much forced to the very edge of the bed and the only way I could make myself comfortable was to spoon Max but he kept hitting me in the chin with his head whenever there was thunder and OW.

So my point is, I'm tired today. I mean, I had already stayed up past my bedtime because I wanted to watch Mr. Darcy win an Oscar, so I wasn't planning on waking up an hour and a half earlier than my alarm. YAWN.

In other news, I got this love letter the other day:

This letter may come to you as a surprise due to the fact that we have not yet met. Firstly, I have to say that I have no intentions of causing you any pain. My name is Mr. Moore Edwards, a European merchant. I have been diagnosed with Prostate and Esophageal cancer that was discovered very late due to lack of caring for my health. It has defiled all form of medicine and right now, I have only about a few months to live according to medical experts. I have not particularly lived my life so well, as I never really cared for anyone not even myself but my business.Though I am very rich, I was never generous, I was always hostile to people and only focus on my business as that was the only thing I cared for. But now I regret all this as I now know that there is more to life than just wanting to have or make all the money in the world. I use to say to my self that if God should give me a second chance I would live differently from how I have lived. I was meditating on my hospital bed and something told me that Go

Hence, I do not trust them anymore, as they seem not to be content with what I have left for them.The last of my money which is a huge cash deposit that I have with a security firm will be put in your care if only you will agree and are capable of seeing this through. I want you to help me collect this deposit and dispatched it to charity organizations of your choice and let them know that it is I Mr.Moore Edwards that is making this generous donation. I am writing this from my laptop computer in my hospital bed where I wait for my time to come. I pray for you to support and assist me with a good heart. I hope we can build a relationship based on trust because I want to do this by all means possible before I die.But the choice is yours Please you can contact me through this email address: mooreedwards1@aol.co.uk

Be blessed my beloved,
Mr.Moore Edwards

For some reason, it was delivered to my spam folder. Which is weird because why would my beloved send me spam? In any case, feel free to email him. It sounds like he could use a pick-me-up.

Anyway, one night, after drinking too much, we sent emails to practically everyone we knew (drunk emailing is way more entertaining than drunk dialing, trust me) and in one email, we said both "Mr. Darcy is a hearthrap," and "Mr. Darcy is the hit of my pants." Thank you, Stephanie, for reminding me of this. GOOD TIMES.
Posted by Jennie at 10:54 AM 4 comments:

I'm glad you were borned. You take care of me when I'm sick AND you didn't let me tumble into the ocean (or off of the balcony) that time I had too much tequila on our honeymoon. Our games of Scrabble always ALWAYS devolve into seeing who can spell the dirtiest words. You completely indulge me when I'm giggling over absolutely nothing (which is often) or just plain being weird (which is even more often) and then you totally outweird ME and it's awesome. You act like a total girl whenever Max does something cute (I mean that in a nice way) and you're nicer to Phoebe than I am.

You help me through scary stuff and won't let me get away with saying I'm not angry even though I obviously am, which pretty much makes you the more mature one in this relationship (duh).

The future may be uncertain but at least we can wander around all confused together. 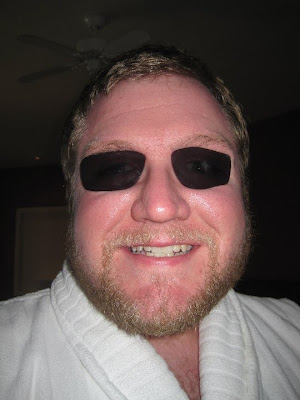 What more could I ask for? HAAAAAAAAAPPY BIRTHDAY!
Posted by Jennie at 8:35 AM 1 comment:

Email ThisBlogThis!Share to TwitterShare to FacebookShare to Pinterest
Labels: joe

won't you be my neighbor

I find it somewhat comforting to realize that I care as much about Valentine's Day now that I'm married as I did when I was single, which is to say, very little.

I do, however, care very much about these Doctor Who Valentine's Day cards. So there's that.

A funny thing happened yesterday in Ohio and that thing was that it wasn't absolutely frigid outside. It was maybe, MAYBE, 45, but that didn't stop some silly Ohioans from running around in shorts and t-shirts. Because that's what people do on the first semi-warm day of the year and I sort of love it. I mean, I'm not going to start running around in a sundress just because it's above freezing, but it was nice to walk Max IN THE SUNSHINE and not have to wear two pairs of pants, a scarf, gloves, and a hat and yet still worry about whether the tip of my nose is going to fall off because OMG I CAN'T FEEL MY NOSE ANYMORE.

I think the warm weather made me more productive, too, because NOT ONLY did I go to the grocery, but Joe and I ran all sorts of boring errands and didn't complain about them ONCE, plus I chopped up a million vegetables so the Crock Pot could make some beef stew for us to have for dinner tonight. I love when the Crock Pot cooks for us, especially on nights when I'm not going to be home until 7:30.

Oh! I forgot to tell you guys something really important about our neighbor, who we call Poltergeist Lady, because, well, she looks like this lady. In fact, when we first moved in, she knocked on our door to introduce herself and when she left, this happened:

So that's how she got the name Poltergeist Lady. She's very nice, but we always thought her a little odd, and the other night I upgraded her status from "a little odd," to "I'm not answering the door anymore."

We had a pretty bad ice storm a couple of weeks ago, and because of this, Joe and I both worked from home. This meant I didn't shower until I "left" work, so I had just gotten out of the shower when there was a knock on the door. Joe answered (in his Superman pajama pants) and I hid in the bathroom and listened. This is what I heard:

Then I heard Joe go into the kitchen, get something out of a cabinet, and go back to the front door.

"What was that?" I shouted once the front door was closed.

Naturally, I was all, "um, WHAT," and it turns out she'd gone to the grocery to buy stuff to make tacos, but had forgotten taco seasoning, and so OF COURSE she went knocking on doors until she found some. Sure, OK. Maybe I'm just unfriendly, but I try to avoid my neighbors at all costs, because there's nothing I hate more than small talk. I'm so bad at it. I don't want to tell you how my day was, I don't care how your day was, and I can't talk with you about the weather anymore or I'll have to stab myself in the eardrum.

Anyway, so if I realized I'd forgotten ANYTHING at the grocery, I would either go back and get it or do without it. Especially if it was something like TACO SEASONING.

But, fine, she's obviously different than me AND THAT'S OK. You know what's not OK? That she came back five minutes later and asked for more.

Joe's way nicer than I am because I would have lied and said we didn't have any taco seasoning the first time she knocked on the door. So it's good that he answered the door instead of me. We want to remain on her good side, you know, in case our TV ever starts talking to us.