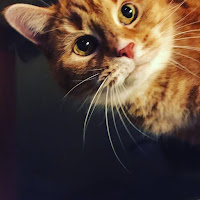 When you get a pet, you’re basically signing up to willingly have your heart broken. Until they develop some sort of serum that extends the longevity of animal lives (get on it, science), we know that, in all likelihood, we’re going to outlive the little life we’re suddenly in charge of. Sometimes they pass naturally, hopefully at a ripe, old age after living a long, healthy life. Sometimes, unfortunately, you have to make the decision for them.

We took Phoebe to the vet last week and learned that she wasn’t doing well. She had several underlying issues that pointed to even more serious issues. There were options. More medical tests. Long term medications and vet visits. But we knew they’d be torture for Phoebe. We went home to think it over and decided that, when we really thought about it, her quality of life wasn’t so good. And adding additional medical tests and medication? Wasn’t going to make it any better. It would only delay the inevitable, and there would always be a chance that we’d wait too long and would need to make the decision suddenly. And in that case, she’d most likely be in even greater pain than she already was.

It wasn’t an easy decision. But it was what was best for her, even if it broke our hearts. Today we took her to the vet for the last time. I’ve been struggling with this decision, obviously, and have only just come to terms with it, though that doesn’t mean I’ve stopped crying about it. This week has really just been an exercise in how many tears the human body can produce. I assume I’ll stop crying at some point. A person can’t cry forever. (RIGHT???)

I adopted Phoebe 12 years ago, funnily enough from the animal shelter I’d later end up working at. I decided I wanted a cat, found the most terrified, saddest looking cat I could on PetFinder, and adopted her. Adopting such a terrified cat as a first-time cat owner was not my brightest moment, but we made it work. After she hid for a week and spent a few months slowly peeing on all of my possessions. Still. We found our stride.

Phoebe was with me through five moves. She was there when I met Joe, when we moved in together, when we got married. She was there when we (to her consternation) brought home Max, and later Mara. She was a sassmouth, who’d respond with a meow whenever you’d say, “kitty?” She hid from most people and was never very social, so whenever she’d crawl on my lap, I’d sit as still as possible, hardly breathing, so I wouldn’t startle her away. Last night, for the first time in a while, she came downstairs and crawled on my lap. Just for a few minutes. I think she was saying goodbye.

I’d had other pets as a kid, but she was my first pet. The first pet that I was directly responsible for. Though I feel like I failed her in not noticing earlier that she was struggling, I’m glad I was able to do right by her in the end. She’s not suffering anymore. And even though she did, in fact, break my heart, I also know she’ll live there forever. Thankfully, there’s some peace in that. 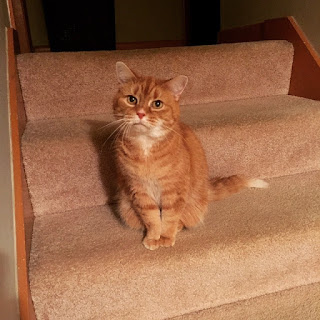